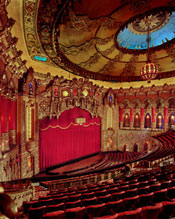 The Fabulous Fox Theatre opened in 1929 as a movie palace, and was one of the first theatres in the nation to be built with full "talkie" equipment for the Movietone process. After shutting its doors in 1978, Fox Associates purchased the theatre in 1982 and restored it to its original glory. The theatre now features various concerts, comedy and dance performances as well as touring Broadway productions.