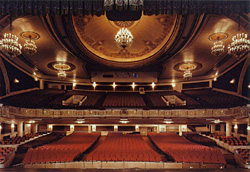 For years the Capital Region has known Proctors as Proctor's Theatre and Arcade. When fully completed in the fall of 2007, Proctors will build on that history of bringing the best in theatre, dance, music and film to the community. With the addition of two new theatres, the capacity to show 3-d wide screen (Extreme Screen) films, a vibrant Arcade with multiple eating and shopping opportunities and, most importantly, a program of arts, entertainment and education that will be year round and world class, Proctors will be the performing arts center of the region! Built in 1926, the 2,700-seat Mainstage is a beautifully restored historic theatre listed on the National Register of Historic Places and located in the heart of downtown Schenectady. As the premiere performing arts facility in New York State's Capital Region, The Mainstage presents the very best in entertainment. Known for presenting the national Broadway touring productions, Proctors also presents popular performers, world-class singers, side-splitting comedians, electrifying dance programs, world reknown classical productions, including opera and symphony orchestras, plus family and children's programming.