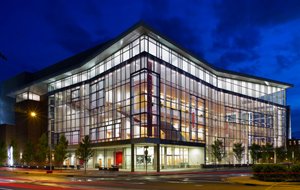 Since its opening in 2008, DPAC (Durham Performing Arts Center) has become the center for live entertainment in North Carolina. Recognized for its contemporary design, DPAC features 2,704 seats, intimate sightlines and state-of-the-art sound and video. Ranked annually among the top-five theaters in America by three leading national magazines that cover live entertainment events and venues, DPAC attracts over 500,000 guests per year.

With a mission of presenting one-of-a-kind live entertainment events, DPAC truly has “something for everyone,” hosting more than 200 performances a year, including spectacular touring Broadway productions, high-profile concert and comedy events, family shows and the heralded American Dance Festival. Owned by the City of Durham and operated under the direction of Nederlander and Professional Facilities Management (PFM), since 2011 DPAC has been listed as the #1 performing arts organization in the region by the Triangle Business Journal.