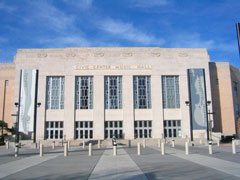 Called "The Municipal Auditorium" when it originally opened in 1937, the building was renamed the Civic Center Music Hall in 1967 when it was renovated to be strictly a performing arts hall. The Civic Center Music Hall is home to three performing arts theatres, including the Thelma Gaylord Performing Arts Theatre, Freede Little Theatre and CitySpace, plus two elegant reception sites.