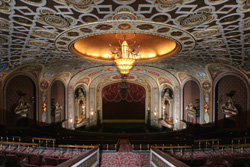 The Providence Performing Arts Center first opened in 1928 as the Loew’s State Theatre Movie Palace, designed by well-known Chicago theatre architects George and C.W. Rapp. With its columns of imported marble, lavish interior, exquisite gold leaf plasterwork, grand proscenium, and flawless structural integrity, the $2.5 million Theatre was, upon completion, emblematic of Marcus Loew’s inspired practice of selling tickets “to theatres, not movies.” On the opening day, more than 14,000 people from the community came to the Movie Palace to see Joe Stoves play the $90,000 Morgan organ, accompanying the film Excess Baggage. After several decades of sustained success, the Theatre’s attendance began to decline mid-century as television became more popular and fewer people were leaving their homes for the sake of entertainment. In addition to mounting economic hardships, the building itself suffered damage in the calamitous hurricanes of 1938 and 1954; the Theatre narrowly escaped demolition in the 1970’s. Finally, following numerous owners, incarnations, and name changes, the Theatre acquired the permanent name of the Providence Performing Arts Center in 1982. Since then, the Theatre has undergone myriad restoration projects devoted to preserving the palatial showcase as a venue for world class entertainment and as a Providence landmark vital to the city’s history and economic and cultural growth. Restoration projects include a full-scale stage house expansion in 1995; the installation of a new marquee in 2000; a specially-commissioned chandelier by renowned designer Dan Dailey, which was installed in 2004; plush new seats and our first-ever elevator in 2005; and, most recently, the installation of additional restroom facilities and a new main Theatre roof. Listed in the National Register of Historic Places since 1977, the Theatre received a Revitalization Award from the Providence Preservation Society for the new marquee in 2000, and was recognized in 2001 with an Historic Preservation Award from the Rhode Island Historical & Heritage Commission. In 2003, the American Institute of Architects, New England, awarded the venue a Citation for Historic Restoration as well. Today, this state of the art venue presents and showcases a wide range of touring Broadway shows, music, contemporary specials, and more.