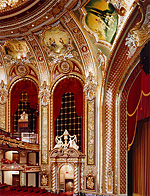 Wang Theatre at the Boch Center

The performing arts have enjoyed a rich and distinguished history in Boston, reaching back over 200 years. Since 1794 when Charles Bulfinch designed Boston's first playhouse, many theaters, concert halls and movie palaces have been built to entertain Boston's large and appreciative audiences. Although many of these structures no longer exist, The Metropolitan Theatre, renamed The Wang Theatre in 1983, remains a prominent landmark. Opened in 1925, "The Met," as it was called, was developed by Max Shoolman and designed by Clarence Blackall, a leading American theater architect. Blackall also designed 12 other major Boston theaters, among them the Colonial and Wilbur, as well as the Copley Plaza Hotel. At that time, The Metropolitan was hailed as a magnificent movie "cathedral," reminiscent of the splendor of a Louis XIV palace and was considered historically the most important Boston landmark of "the Roaring Twenties." Rivaled by few other theaters in the world, its glittering crystal chandeliers and imposing columns and doorways of imported marble formed an elegant setting for thousands of patrons who came to be entertained by motion pictures, big bands and vaudeville. Renamed The Music Hall in 1962, the theatre became home to the newly-formed Boston Ballet. During the 60s and 70s, Music Hall audiences also enjoyed the Stuttgart Opera, the Metropolitan Opera, Bolshoi Ballet and Kirov Ballet as well as popular movies and performing artists. In 1980, the Theatre converted to a not-for-profit organization known as The Metropolitan Center and renovations to the stage and backstage attracted Broadway--Sweeney Todd with Angela Lansbury, Peter Pan with Sandy Duncan and My Fair Lady with Rex Harrison. An extraordinary gift in 1983 from Dr. An Wang, founder of Wang Laboratories, ushered in the era of The Wang Center. From 1989-1992, pure chutzpah and ambition raised $9.8 million to return the Theatre to its glory days of the 1920s. Since its restoration, The Wang Theatre has hosted an impressive array of world-class theater, music, dance and film. In the past few years alone, the Center broke box office records with musicals such as Les Miserables and The Phantom of the Opera and has hosted productions such as Riverdance, Jekyll & Hyde, Sunset Boulevard, American Ballet Theatre, Whitney Houston and Harry Connick Jr. It also continues to serve as a home to the nationally-acclaimed Boston Ballet, as well as annual visits from Alvin Ailey American Dance Theater for more than 25 years. For many years, with help from special celebrity guests The Wang Center presented its Classic Film Series, returning to the roots of the Theatre with classic films such as Casablanca, All About Eve and An American in Paris shown on one of New England's largest screens. In addition, the Wang Center Now operates and manages The Shubert Theatre as the home of many local not-for-profit performing arts organizations. Over the years, millions have looked up in awe at the elegance of the Grand Lobby, or in wonder at the theatrical feats onstage. The Wang Center is known throughout New England as a true community arts center whose doors are open to all.