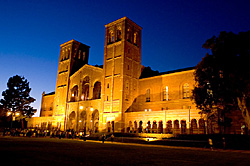 Description
UCLA Live's extraordinary history is rooted in the late 1930s, when George Gershwin, Duke Ellington, Arnold Schoenberg and Jimmy Dorsey's Band all performed in Royce Hall. Since then, the list of illustrious artists who have graced Royce Hall's stage reads like a Who's Who of performing arts in the 20th and 21st centuries, including Frank Sinatra, Ella Fitzgerald, Leonard Bernstein and the New York Philharmonic, Twyla Tharp, Frank Zappa, Mikhail Baryshnikov, The Philip Glass Ensemble and Meredith Monk to name a few. Modeled after Milan’s San Ambrogio Church, constructed in the tenth and eleventh centuries, Royce Hall was built in 1929 as one of the first campus structures. Its unique Romanesque architecture prompted the State Historic Preservation Office to select it for restoration to its original design. In 1936, University of California President Robert Gordon Sproul appointed a committee to oversee programming and in 1937, Royce Hall’s first performing arts season was born. The first subscription series included the great contralto Marian Anderson, the Budapest String Quartet and the Los Angeles Philharmonic. As the programming grew, Royce began to fill the role of second cultural center in Los Angeles, serving especially the western part of the city. But rather than merely duplicating downtown programming on a smaller scale, Royce Hall’s program began to distinguish itself and develop its own identity. From the beginning, dance constituted an important element of this new identity. Trudi Schoop and her company appeared on the artists series as early as 1939, and subsequently nearly every important dance troupe, from the American Ballet Theatre and Martha Graham to the Ballet Russe, Bejart Ballet, Pina Bausch Tanztheater Wuppertal, Robert Joffrey and Bella Lewitzky has performed on its stage. Like Carnegie Hall and Lincoln Center, Royce Hall is one of America's great concert halls, distinguished, not only for its impeccable beauty and refined acoustics, but also for the ghosts of performances that haunt it. As the main performance venue for UCLA Live, the most important aspect of Royce Hall’s legacy has been its role in providing something other than just the standard cultural menu. Under Director David Sefton, UCLA Live has made it a priority to present, not only artists at the apex of their gifts, but also avant-garde forms of expression as part of the regular program. Today, Royce Hall is not only regarded as the symbol of UCLA, but also as ground zero for the most exciting, innovative and far-reaching programming on the West Coast.
Camelot
Sep 11, 2007 - Sep 23, 2007
Music by Frederick Loewe; Book by Alan Jay Lerner; Lyrics by Alan Jay Lerner
Musical Revival