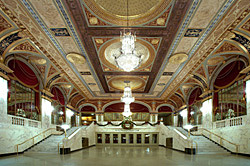 Named after theater impresario Sylvester Z. Poli, construction on the Poli Palace began in 1920. In January of 1922, the Palace officially opened its doors. Designed by period architect Thomas Lamb, in what is described as a Renaissance Revival style, the Palace Theater featured an eclectic mix of Greek, Roman, Arabic and Federal motifs and boasted grand lobby spaces, and ornate dome ceilings, in a palatial setting fit for a king - but intended for the people of Waterbury. Originally a movie/vaudeville house, the Palace Theater changed with the times over its seventy years of operation, presenting everything from silent films, to the Big Band sounds of the Tommy Dorsey Band, to contemporary rock concerts such as Bruce Springsteen. Once considered the premier performance venue in the Northeast, the Palace unfortunately saw its lights go dim in 1987. Now, after eighteen years of being dark, and a significant financial investment by the State of Connecticut, the lights are back on at the landmark Palace Theater, with a major renovation, restoration and expansion. Positioning itself as Greater Waterbury's Center for the Performing Arts, this exquisite complex will showcase a performance schedule that includes Broadway shows, comedy acts, family entertainment and so much more! With a mission focused on serving as an art, cultural, educational and economic catalyst for the community, the Palace Theater will once again reclaim its position as a destination for the people of Waterbury and beyond. The future is full of entertaining new possibilities!