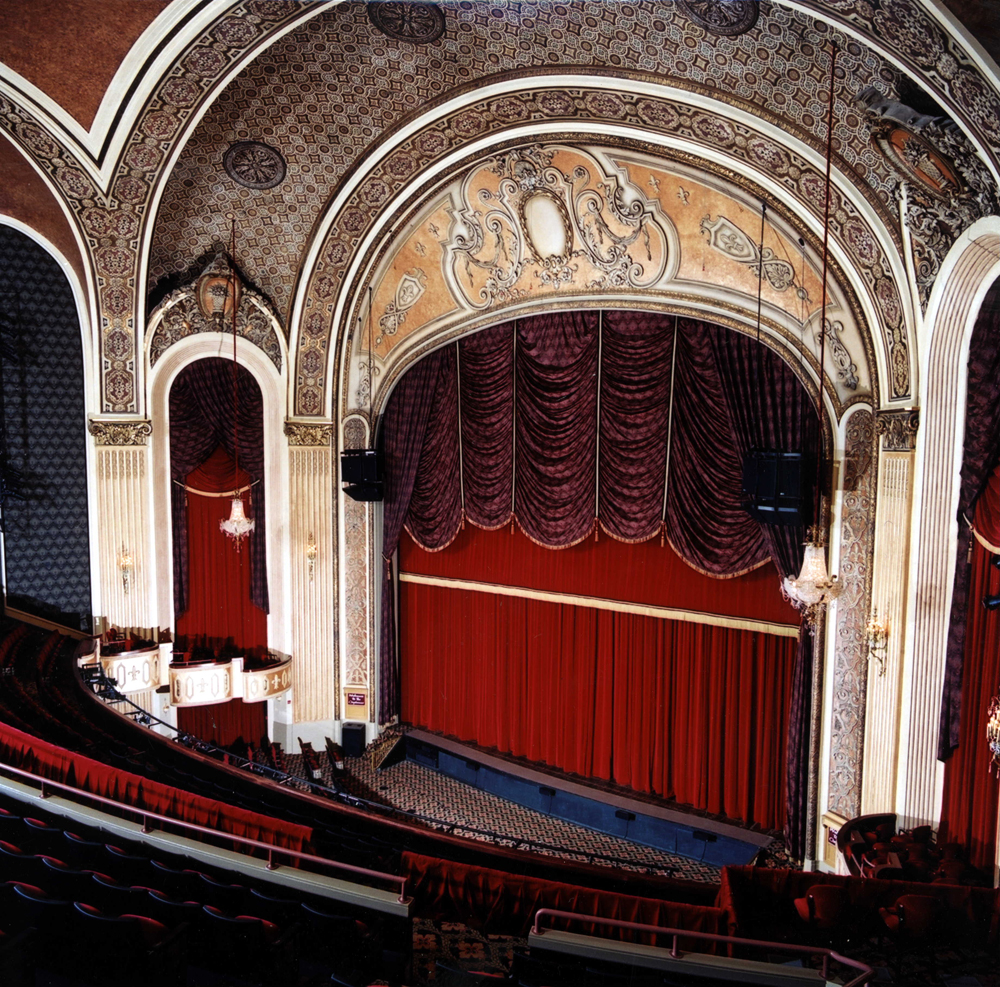 The Sioux City Orpheum was designed by the nationally known Chicago firm of Rapp & Rapp and constructed in 1927 as part of the Orpheum Circuit. The major builder for the theatre was local Sioux City businessman, Arthur Sanford. It was one of the largest theatres in Iowa at its time. This once opulent vaudeville and moving picture house boasted a large 2,650 seat, three story auditorium complete with Wurlitzer pipe organ, half circle boxes, hand carved detailing, gilded ornamentation, several crystal chandeliers and a hand painted ceiling. Throughout the years, the Orpheum was used for symphony performances, ballet and special attractions and hosted entertainers such as Fred Astaire, Tallulah Bankhead, and Katherine Hepburn. In the 1970's and 80's the Orpheum was remodeled and turned into a one-story movie house with fluorescent light fixtures and a projection booth carved into what was once the mezzanine balcony. Later it was split into a two-screen theater. The wings of the balcony were cut off, the half circle boxes were removed, and the chandeliers and fine architectural detailing were covered over with false ceilings. The building was closed to the public in 1992. The Orpheum Theatre Preservation Project began the restoration process in 1999, with architects and theatre experts from FEH here in Sioux City, and theatre restoration expert Ray Sheppardson from GSI Architects in Cleveland, OH. The building was restored by a restoration team of local and nationally prominent professionals. The few surviving crystal chandeliers, light fixtures and lighting devises were meticulously restored. The missing ones were replaced with exact replicas or period appropriate antiques and reproductions. The aluminum entrance doors were replaced with historically appropriate African mahogany doors. All of the terrazzo baseboards and mahogany handrails were stripped and their finishes restored. The original drapes and fabric wall coverings were reproduced in both the grand lobby and the auditorium. The original carpet was carefully replicated and installed throughout the theatre. The original ornate terra cotta drinking fountains were replicated from the original drawings and returned to their prominent positions. The balcony and side boxes were replaced using original drawings and available photographs. The stencil and trompe l'oeil grand lobby ceiling was uncovered and meticulously documented. The historic designs were replicated to match the original appearance in technique and color. The surviving original auditorium stencil and trompe l'oeil was carefully cleaned and repaired and missing sections were meticulously reproduced. Historic decorative finishes were reinstated throughout the entire theatre and lobbies. Approximately two years and thousands of hours later, the Orpheum Theatre was re-opened on September 15, 2001. Since the grand re-opening, the theatre has provided the Siouxland area an opportunity to attend performances by fabulous performers like Bill Cosby, Sheryl Crow, BB King, Bob Dylan, Wynton Marsalis, David Copperfield, Willie Nelson, Jewel, Alison Kraus, and Jerry Seinfeld. In addition, thousands have witnessed spectacular Broadway shows and enjoy hearing the Sioux City Symphony. Jam Theatricals and the City of Sioux City proudly presents the Broadway at the Orpheum season.