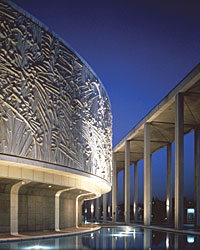 Description
Since it opened in 1967 the Mark Taper Forum has been honored for its development of new plays and voices for the theatre and for its continuing commitment to serve the broadest possible audience. It has received virtually every theatrical award including the 1977 special Tony for theatrical excellence. With Michael Ritchie as its Artistic Director and Gordon Davidson its Founding Artistic Director, the 745-seat Mark Taper Forum is one of the top resident theatres in the country. The theatre has guided and developed an impressive number of Tony Award-winning and Pulitzer Prize-winning plays, including Children of a Lesser God, The Shadow Box, The Kentucky Cycle and Angels in America. The Taper was distinguished by having two of its plays The Kentucky Cycle and Angels in America (Part One - Millennium Approaches) receive in consecutive years the Pulitzer Prize in Drama, the first time for plays produced outside of New York. Recent Taper productions include August Wilson's King Hedley II, Gem of the Ocean and Radio Golf, the revival of Rodgers and Hammerstein's Flower Drum Song with a new book by David Henry Hwang, David Mamet's Romance, a revival of Anton Chekhov's The Cherry Orchard with Annette Bening, David Hare's Stuff Happens and Culture Clash's Chavez Ravine and Water & Power. The Taper has a five to six play subscription season which usually runs from September to August, and includes one of the highest year-round subscription figures for resident theatres in the country with annual attendance over 250,000.
What the Constitution Means to Me
Jan 12, 2020 - Mar 01, 2020
Written by Heidi Schreck
Play Original
for colored girls who have considered suicide / when the rainbow is enuf
Aug 10, 1977 - Sep 25, 1977
Written by Ntozake Shange
Play Original All Female CastDancePoem