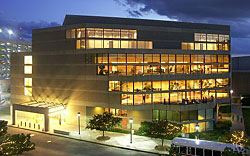 The Lied Center for Performing Arts, created by and for the people of Nebraska, opened in 1990. For 16 years beginning with the first event, Opera Omaha's production of Madama Butterfly, it has been our mission to present the finest performing artists on our stages. University of Nebraska President and University of Nebraska Foundation President D.B. "Woody" Varner joined with others whose passion for the arts and dreams of a worthy arts center resulted in years of awareness building and fundraising. Sheila Griffin, first Lied Project Director and E.N. "Jack" Thompson joined Woody in leading the effort toward success. A challenge grant from the Lied Foundation Trust was successfully matched with gifts from UNL alumni and friends. Matching gifts or grants from 71 corporations and a generous allocation from the Nebraska Unicameral completed the fundraising campaign prior to the beginning of construction in 1986. From the start, the Lied Center has been about serving the community and state by presenting national and international artists on our stages and developing and sustaining programs that reach out to all parts of Nebraska. Arts Across Nebraska, a major program combining statewide tours, extended residency and collaborations with communities outside Lincoln is the direct result of visionary thinking and the hard work of staff and community supporters. Today, the Friends of Lied, a statewide support organization, raises funds for programming, education, operations and shares the Lied's message in all parts of the state. The Lied Center, once a dream of a few dedicated citizens, has become a premiere performing arts center of the Midwest and nation. However, we remain, first and always, Nebraska's Home for the Performing Arts.