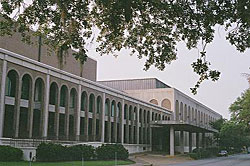 Description
The Savannah Civic Center is responsible for providing a wide spectrum of entertainment and cultural events while also hosting conventions, exhibit shows and social events. The Civic Center currently employs 20 full-time and 300+ event labor staff. The building hosts around 900 events annually ranging in variety from the Rolling Thunder Monster Truck show and Figure Skating Champions on Ice to Ringling Brothers Circus, Walt Disney on Ice, Best of Broadway Series, concerts and ballet. The Martin Luther King Arena has seating arrangements ranging from 3,500 to 9,600 while the Johnny Mercer Theatre seats 2,524, boasting one of the largest prosceniums in the Southeast. Many regional parties, wedding receptions, reunions and other gatherings are booked in the Civic Center Grand Ballroom and East and West Promenades. Numerous meetings are held in the building's new meeting wings. The Savannah Civic Center is located on the corner of Liberty and Montgomery Streets. The administrative office hours are Monday through Friday, 8 AM to 5 PM. The Box Office, located on the Orleans Square side of the building, operates from 10 AM to 5 PM as well as show day and nights. Jam Theatricals proudly presents the Broadway in Savannah season.
Media
See all 2 photos