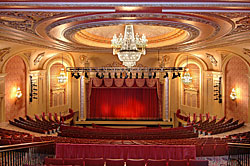 Description
After sitting vacant for twelve years, the Genesee Theatre began its $23 million renovation in July of 2001 as part of the City of Waukegan's downtown renovation project. With the help of over 120 volunteers, the Genesee was brought back to its original splendor. Every care was taken in the restoration to ensure the integrity of this great venue. All wall fabrics in the facility are exact replicas of the original wallpaper and coloring in the facility has been recreated as exactly as possible based on existing paint chippings. Many of the original plaster moldings, wooden railings and light fixtures have been kept intact. The marquee, installed on September 2, 2004, is an exact replica of the one which graced the Genesee in 1927. Now an 115,000 sq. ft. state of the art facility, the Genesee has expansive lobbies and lounges, stage size has been doubled and a balcony expansion has raised seating capacity to over 2,400, making the Genesee Theatre one of the largest facilities of its kind in the region. In addition, to ensure that there is no question to the splendor of this facility, a one-of-a-kind, 18 foot, Baccarat crystal chandelier has been added to the grand lobby. The chandelier, which originally hung in Seattle's Orpheum theatre, is valued at $350,000 and weighs 2,200 pounds, includes thousands of pieces of crystal and features gold plated sconces. Kept in boxes since 1967, the chandelier was sold for only $100,000 to the Genesee Theatre by Mr. Louis Bianchi, and the remaining $250,000 was donated to the renovation efforts. The Genesee Theatre re-opened its doors on December 3, 2004 to two sold out performances of Bill Cosby, and will continue to provide the highest quality of performances including comedians, Broadway productions and national and regional musical acts. The Genesee Theatre is located in downtown Waukegan, originally a commercial port city and later an industrial center; it is now the seat of Lake County. Within short distance to Chicago and Milwaukee, and home to a culturally rich and diverse population, the city is poised for a dramatic comeback. The Genesee Theatre is an SMG managed facility. Founded in 1977, SMG is the world's leading facility management company with over 170 facilities in the United States, Canada, Puerto Rico, and Europe and services over 9,000 events and 50 million patrons a year. The company provides services to 37 theatres for a total of over 111,000 seats. Jam Theatricals proudly presents the Broadway and More! Season at the Historic Genesee Theatre.
A Night with Janis Joplin
Oct 05, 2019 - Oct 05, 2019
Written by Randy Johnson
Musical Original
One Mo' Time
Feb 14, 1982 - Feb 14, 1982
Written by Vernel Bagneris
Musical Original Revue