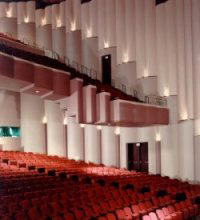 Description
Wortham Theater Center represents Houston's can-do spirit at its very best. Built at the height of the 1980s oil bust, Wortham Center was funded entirely by the private sector. More than 3,500 donors contributed $66 million to build a new performing arts mecca amid a period of job losses and recession. It was a true community effort -- 2,200 individuals gave $100 or less. What's more, the 437,500-square foot facility was completed four months ahead of schedule and $5 million under budget, a testament to Houston's trademark ability to get things done. At the time, Wortham Center was the first major opera house built in the U.S. in more than 25 years, further underscoring Houston's capacity to do things other communities would not dare under take. The building is the legacy of the late Gus S. Wortham, the founder of American General Insurance Company whose foundation contributed $20 million to the capital campaign. The Cullen Foundation and the Brown Foundation chipped in with $7.5 million and $6 million, respectively, in a demonstration of the collective strength of Houston's philanthropic spirit. Today, Wortham Center is home to Houston Ballet and Houston Grand Opera. Since its opening in 1987, Wortham has entertained audiences totaling more than 5 million people. It has also served as the backdrop for hundreds of social galas, civic meetings, corporate and group events, and even weddings, further underscoring its role as a community center as well as a performing arts venue. Bold and beautiful, the Wortham is a facility like no other. A wonder of technology, it is a masterful, creative playground for performing artists, and unrestrained in the exuberance of its architecture. Eugene Aubry of Morris Aubry Architects designed Wortham Center. The facility features two theaters, the Alice and George Brown Theater and the Roy and Lillie Cullen Theater. At 2,423 seats, the Brown is the "big house" at Wortham. The 17,000-square foot stage is primarily used for major performances by Houston Ballet and Houston Grand Opera. Despite its size, no seat is more than 138 feet from the stage. The 1,100-seat Cullen Theater hosts smaller opera and ballet productions and serves other arts groups, such as Society for the Performing Arts and Da Camera of Houston and Mercury Baroque. Its intimate size is ideal for solo artists, chamber music, small touring shows and recitals. Host to many of the world's most accomplished entertainers, it is the place of memorable times, special people and important events. Within this splendid domain are an array of public spaces, both monumental and intimate: the jewel box-like theaters, the soaring six-story Grand Foyer, the delicately scaled Green Room and Founders Salon.
Proof
Jan 01, 2002 - Jan 13, 2002
Written by David Auburn
Play Original Drama
A Tuna Christmas
Nov 15, 1994 - Nov 20, 1994
Written by Ed Howard, Jaston Williams, Joe Sears
Play Original Comedy
Lost in Yonkers
Apr 06, 1993 - Apr 11, 1993
Written by Neil Simon
Play Original Comedy
A Tuna Christmas
Dec 15, 1992 - Dec 20, 1992
Written by Ed Howard, Jaston Williams, Joe Sears
Play Original Comedy
Broadway Bound
Oct 11, 1988 - Oct 16, 1988
Written by Neil Simon
Play Original Comedy