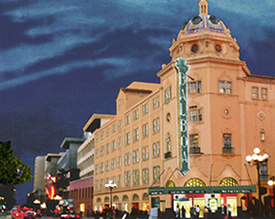 The historic Balboa Theatre was originally opened in 1924 as a vaudeville house before being converted to a movie theatre in 1932. After a $26 million restoration and renovation by the City's Redevelopment Agency, the Balboa Theatre located in the Gaslamp Quarter reopened in 2008 as a 1,339 seat performing arts venue.